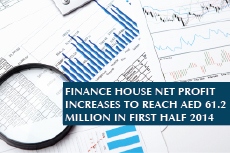 Abu Dhabi, 23 July 2014 - Finance House PJSC (FH) has registered a robust consolidated net-profit of AED 61.2 Million for the six months ended 30 June 2014, marking an increase of 8.3% compared to AED 56.5 Million in the corresponding period of the previous year.

Commenting on first half 2014 results, Mohammed Abdulla Alqubaisi, Chairman of Finance House said: “The stable economic environment in the UAE has allowed us to focus on our core engines of growth which are commercial and consumer lending and proprietary investments. Our strategy of continuously seeking and addressing profitable & underserved niche segments has enabled us to generate healthy returns for our shareholders on a sustained basis. We are confident that this strategy will continue to serve us well in the near future as well.”