Share On:
Previous News
Next News
Insurance House Opens Up Shareholding to Foreigners 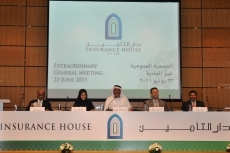 Abu Dhabi, 25 June, 2011 – Following the official launch of its operations ‎and the successful listing of its shares on ADX earlier this week, the ‎shareholders of Insurance House PSC (IH) have approved during its ‎Extraordinary General Meeting(EGM) to open up shareholding to foreigners ‎to an extent of 25% of the company’s paid up equity share capital.‎

Commenting on that achievement, Mohammed Abdulla Alqubaisi, Chairman ‎of Insurance House, said:” This achievement wraps up a momentous week ‎for Insurance House, where by we have officially launched and successfully ‎listed the company’s shares on ADX earlier this week”.‎

‎ “With the enthusiasm of its team and devotion of its Board members, ‎Insurance House is proving itself as a model of competence, in the market. ‎We are setting new standards in the insurance sector through our swift ‎progress and rapid movement”, added Alqubaisi.‎

Insurance House has listed its shares on ADX under the ticker symbol “IH”, ‎where by its shares have been trading positively above par. Opening up to ‎foreigners is another achieved goal for the company following a series of ‎remarkable achievements since the completion of the 1st successful post ‎crisis Initial Public Offering (IPO) in the UAE. ‎

‎“That is another milestone for Insurance House. We will always strive for ‎excellence and will endeavor constantly to create value for our existing ‎shareholders. Additionally, we will give an opportunity to foreign investors ‎to participate in our promising venture by building a successful and ‎established relation with them”, concluded Alqubaisi.‎

In order to keep in touch with its shareholders, investors and customers, IH ‎had recently launched its website, a valuable and reliable source for news, ‎activities, and events of the company, which has been developed to provide ‎comprehensive information about products and services offered by ‎Insurance House, aimed at making the users experience effortless yet ‎favorable.‎

Insurance House offers a host of comprehensive insurance products and ‎services to institutions as well as individuals from its head-office in Abu ‎Dhabi, in addition to branches spread in Dubai and Sharjah. ‎