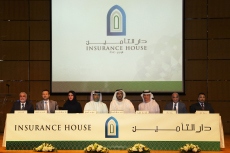 The Net Written Premiums during the first half of 2014 rose by 23% to reach AED 31.11 million, compared to AED 25.29 million during the same period in the previous year. IH registered a Net Profit of AED 4.21 million during the half year ending 30 June 2014. Net Underwriting Profit for the half year ending 30 June 2014 was lower at AED 3.61 million compared to the same period last year, due to higher amount of claims paid under Motor & Medical Insurance Policies.

Commenting on Insurance House’s results, Mohammed Abdulla Alqubaisi, Chairman of Insurance House said: “In an increasingly competitive insurance industry environment in the UAE, top line growth achieved by the company during the first half of 2014 is commendable. The challenge ahead is to translate this top line growth into sustained improvement in Net Underwriting Profit. We are ready for this challenge.”

Underwriting Profit from core insurance business was complemented by robust returns generated from a well-diversified and professionally managed proprietary investment portfolio. Income from investing activities during the first half of 2014 more than doubled to AED 13.75 million, compared to AED 5.18 million logged during the same period of the previous year.

According to Ahmad Idris, Chief Executive Officer of Insurance House, “Our strategy is to compete on the basis of innovative product offerings and superior service quality. Going forward, profits from core insurance activities will be driven by periodical fine tuning of our risk underwriting guidelines and through enhanced claims management.”

“We are proud of our achievements to date and are thankful to our loyal customers and employees, without whose support, these achievements would not have been possible,” added Alqubaisi.