Share On:
Previous News
Next News
Insurance House gets Listed on ADX and Officially Launches its Operations 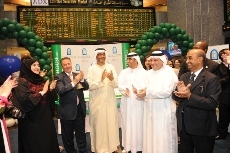 Abu Dhabi, 20 June, 2011 –In an event held at the premises of Abu Dhabi Securities Exchange (ADX) ‎and in the presence of a number of officials of the Market, Insurance House ‎shareholders, investors, and a vast number of media representatives, Abu ‎Dhabi Securities Exchange (ADX) has announced the listing of Insurance ‎House P.S.C (IH), a company specialized in insurance, within its listed ‎companies, whereby the company has launched its operations through ADX ‎under the ticker symbol “IH”. ‎

Rashed Al Baloushi, Deputy CEO, and Director of Operations at ADX, ‎welcomed Insurance House and said: “We hereby congratulate Insurance ‎House for its successful listing on ADX, and we look forward to work with the ‎company to witness its advancement and growth”.‎

At the first day of trading in Insurance House Shares, Al Baloushi said, ‎‎”Insurance House has obtained all regulatory and legal approvals related to ‎listing and trading in its shares, in accordance with the rules and regulations ‎adopted by ADX”.‎

Al Baloushi continued, "listing of Insurance House is very important for the ‎market and the company, where by it further strengthens its position in the ‎market locally, regionally and globally, and will secure future growth, not to ‎mention also that this process will open the doors to foreign investors and ‎local citizens who are looking for more opportunities to diversify their ‎portfolios".‎

Al Baloushi added, "As part of the program of best practices that we adopt ‎and apply through the operational mechanisms at Abu Dhabi Securities ‎Exchange, and in line with the strategy and aspirations of ‘Abu Dhabi Vision ‎‎2030’, we encourage more companies to list their shares in the market, ‎stressing through his speech the importance of new IPOs in giving investors ‎more opportunities to diversify their investments and therefore spread their ‎risk further, which consequently helps to enhance stability in the market ‎which in turn will attract more institutional investments to Abu Dhabi in ‎particular and the UAE in general”.‎

At his part, Mohammed Abdulla Alqubaisi, Chairman of Insurance House, ‎said, “We have been looking forward for this occasion and are very delighted ‎that investors will be given the chance to trade IH shares which have been ‎listed on ADX as of today”.‎

The official launch and listing of the shares is another milestone for the ‎company following a series of remarkable achievements since the completion ‎of the 1st successful post crisis Initial Public Offering (IPO) in the UAE. ‎Insurance House has been softly launched by the mid of last month, where ‎by several insurance policies have been issued. ‎

‎“With the support of Finance House being the major shareholder, we have ‎kept our pledge to investors and officially launched the operations at a ‎record period of time, allowing us to minimize setup and establishment ‎costs”, commented Alqubaisi.‎

‎“The enthusiasm of our board members, management team, and staff is ‎unparalleled. I am very comfortable that by means of their continued ‎eagerness and dedication, our ship will be cruising in the right direction”, ‎added Alqubaisi. ‎

‎“I would like to thank everyone who has supported us reach where we are ‎now. A special note to the concerned officials at ADX, Emirates Securities & ‎Commodities Authority, and the Insurance Authority”, continued Alqubaisi. ‎

To add to its existing staff and in line with ‘Abu Dhabi Vision 2030’, ‎Insurance House will be launching a program to attract and retain the best ‎UAE nationals in the insurance sector.
‎
‎“On the occasion of the official launch of Insurance House, I would like to ‎invite UAE nationals to join our team and be part of this exciting and ‎promising venture”, concluded Alqubaisi.
‎
Insurance House offers a host of comprehensive insurance products and ‎services to institutions as well as individuals from its head-office in Abu ‎Dhabi, in addition to branches spread in Dubai and Sharjah.‎