Share On:
Previous News
Next News
Insurance House Comprehensive Profit Up 29% And Gross Premiums Written Up 65% 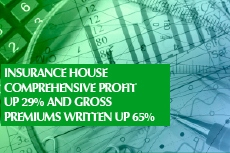 Underwriting Profit from core insurance business was complemented by robust returns generated from a diversified and professionally managed proprietary investment portfolio. Income from investing activities during the reporting period soared to AED 9.26 million, compared to AED 2.45 million during the same quarter of the previous year.

Commenting on Insurance House’s results, Mohammed Abdulla Alqubaisi, Chairman of Insurance House said: “We have carried the positive business growth momentum from the previous year into the current year. Through continuous improvement in risk underwriting norms and enhanced claims management, we should be able to achieve even better results going forward.”

According to Ahmad Idris, Chief Executive Officer of Insurance House; “Since inception, we have constantly challenged ourselves by setting ambitious growth targets and have consistently achieved them despite competitive market conditions. We are thankful to our loyal customers and employees, without whose support, these remarkable achievements would not have been possible.”