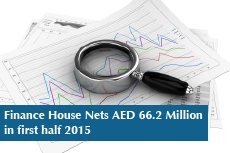 On the back of a sustained growth in the lending book and targeted expansion of the fixed income portfolio, Net interest income and income from Islamic financing and investing assets grew by an impressive 46.7% YOY to reach AED 93.4 million during the first 6 months of 2015 compared to AED 63.7 million in the corresponding period of the previous year. Net Fee & Commission Income was however lower than the previous year due to lower brokerage revenue from subdued activity in the domestic equity markets during the first 6 months of 2015 compared to the same period in 2014. Income from a well-diversified proprietary investment portfolio stood at AED 70.3 million, which is 5.4% higher than the investment income of AED 66.7 million registered during the same period of the previous year.

As at 30 June 2015, Shareholders’ Equity stood at a healthy AED 749.5 million compared to AED 703.9 million at the same time last year, whilst the Capital Adequacy ratio on a risk weighted basis at the consolidated level stood at a robust 19.9%. In line with its cautious approach to liquidity management, Cash and cash equivalents as of 30 June 2015 stood at a very comfortable level of nearly 16% of Total Assets.

Commenting on first half 2015 results, Mohammed Abdulla Alqubaisi, Chairman of Finance House said: “The relatively stable economic environment in the UAE has allowed us to focus on our core engines of growth which are commercial and consumer lending and proprietary investments. Our strategy of continuously seeking and addressing profitable & underserved niche segments has enabled us to generate healthy returns for our shareholders on a sustained basis. We are confident that this strategy will continue to serve us well in the near future also.”