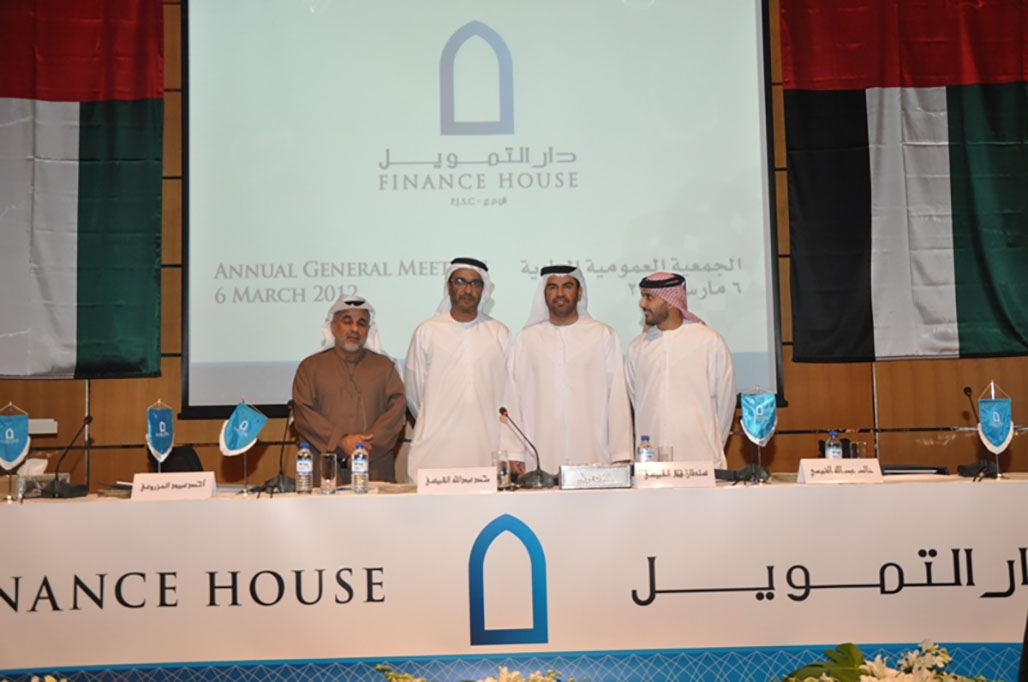 Abu Dhabi -07 March, 2012 – Finance House PJSC shareholders approved the payout of a cash dividend of Twenty per cent (20%), during the Annual General Meeting held at the Emirates Institute for Banking and Financial Studies (EIBFS) in Abu Dhabi.

In his address to shareholders, Mohammed Alqubaisi, Chairman of Finance House, said: “We take pride in ourselves that we have earned profits for the seventh consecutive year and successfully faced challenging market conditions and significantly tighter regulatory requirements”.

Reflecting on the year 2011 with a sense of satisfaction, he said: “Finance House scaled a new height of success in 2011 as the company was adjudged Best Retail Finance ‎Company in the Middle East at the Banker Middle East Industry Awards ‎‎2011”.

The Chairman said: “The political instability continued to haunt the MENA region in 2011 too, shaking confidence of investors and dampening business sentiments. We hope that the situation will change for better during the present year, restoring faith of investors completely and bringing robust growth in all sectors of business activities”.

“The UAE, which remains our key focus market, has shown commendable resilience even during the turbulent period, and this stability in the economy can be attributed to its prudent leadership”, he added.

“We, as a responsible and national organization, are keeping a close watch on all unfolding situations in the MENA region, but at the present time, we do not envisage any material changes to our business strategies or near-term growth objectives”, the Chairman added.

Alqubaisi said: “We have entered 2012 with a renewed dynamism as we have launched the most rewarding Titanium Credit Card with the lowest interest rate in the UAE market, poised to change the dynamics of credit market in the country for ever”.

“We will continue to innovate and improve our products and services this year too to match growing expectations of our customers”, he added.

“Our strong capital base, clear business strategies, well diversified asset book, combined with our capability to exploit various opportunities to our advantage, will take us to a new height of achievement in 2012”, the Chairman concluded.