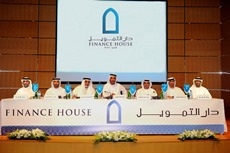 Bearing in mind the Total Comprehensive Income of AED 117.6 million posted during the year, the sound liquidity position and the robust Capital Adequacy ratio, the Board has recommended a cash dividend of 25% subject to regulatory approvals.

Commenting on 2013 results, Mohammed Alqubaisi, Chairman of Finance House said: “We are proud to maintain our profitable stance for the ninth successive year since inception. In less than a decade, we have experienced a complete boom-bust cycle and it is gratifying to note that our resilient business model has delivered profitable growth not only during periods of rapid economic growth but also during periods of relative economic stagnation or contraction. For a genuine private sector enterprise operating in the fiercely competitive UAE financial services sector, this is a creditable achievement indeed.”

During the year, Customer Deposits grew by a robust 20.8% to reach AED 2.18 billion compared to AED 1.80 billion as at the end of the previous year. This level of Customer Deposits is an all-time high and bears testimony to the confidence that the market places in Finance House.

Net Loans & Advances including Islamic Financing & Investing Assets as at 31 December 2013 grew by 8.4% to AED 1.58 billion compared to AED 1.46 billion at the end of the previous year. Loans to Deposits ratio as of 31 December 2013 stood at a healthy 72.5% compared to 80.8% in the previous year, reflecting a cautious approach to loan book growth as well as the significant head room available for sustained loan book growth in 2014 and beyond.

FH’s Non Performing Loan provisioning policy continues to be conservative and as of 31 December 2013, the Company maintains healthy loan loss coverage of 94% (2012: 81%) by way of specific provisions to cover net exposure against individually impaired loans as well as loan balances that are past due for 91 days or more but are not impaired. In addition, FH also maintains a collective provision of 1.25% of the Performing Portfolio.

FH continues to manage its liquidity in a prudent manner. Since the onset of the financial crisis in October 2008, FH has remained a net lender to the UAE inter-bank market and continues to maintain this position till date. Cash and cash equivalents as at 31 December 2013 swelled to AED 817 million compared to AED 599 million as at the end of the previous year, representing a healthy 19.8% of Total Assets.

Shareholders’ Equity as at 31 December 2013 improved to AED 729 million registering a robust year on year increase of nearly 12%. Capital adequacy ratio computed in accordance with Basel II guidelines stood at a robust 24.6%, providing a solid footing for accelerated future growth in assets.

“We look forward to 2014 with renewed optimism for sustained profitable growth, in line with improving economic conditions. Our strategy is sound and we have the necessary mechanisms and structures in place to exploit profitable opportunities, to adapt quickly to changing market conditions, to continue managing risks well and to maximize returns for our shareholders,” concluded Alqubaisi.